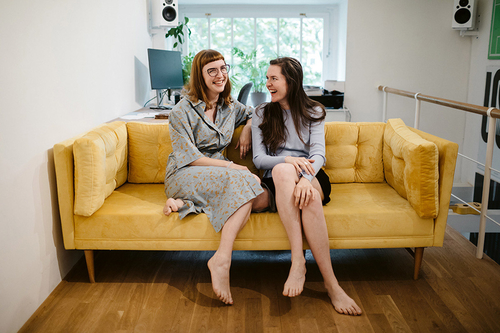 “Well, Adél, how do we start?”
“I think that this issue is kind of unique.”
“In what way?”
“We have stripped architecture naked. And ourselves, too.”
“What’s it feel like to be naked for you?”
“It’s OK now, but it wasn't so great to begin with. What will people say? Is it too much? Or too little? Should I start dancing as well, so that people like it?”
“I think we haven’t danced enough…”
“And that’s why we didn’t dance alone. Did you enjoy it?”
“As my friend says, sometimes it’s a drudge. But mostly it’s fine and I’ve learned some new moves. I have to say, when you’re naked, it’s much less like drudgery.”
“What d’you think the editors will say when they read this editorial?”
“I don’t think they’ll approve it. But we can try and appease them by writing about what the issue is about. What is it about, actually?”
“Well, we’ve already mentioned the stripping.”
“And several other touchy topics that might irritate some people…”
“I guess you’re right. But someone had to do it, didn’t they? Are you scared?”
“I have to admit, Adél, that my butt is kind of clenched.”
“Well if it doesn’t work out with architecture, we can still be goldsmiths and carpenters.”
“Actually, I think I might end up being a gardener. We might get invited to that gardening TV show.”